In general, I liked this plug-in in spite of some issues I discovered. Regroover does pretty much what it says on the tin. It can provide up to six split layers of analyzed material, separating the source into individual components as well as a container for 16 triggerable expansion pads. This plug-in is primarily for drums. Materials with other sustain-y musical elements such as bass synth or guitar or pads will create unexpected results, which may or may not be useful. It really depends on how you view and manipulate the results of non-drum loop material. Drums are its forte. 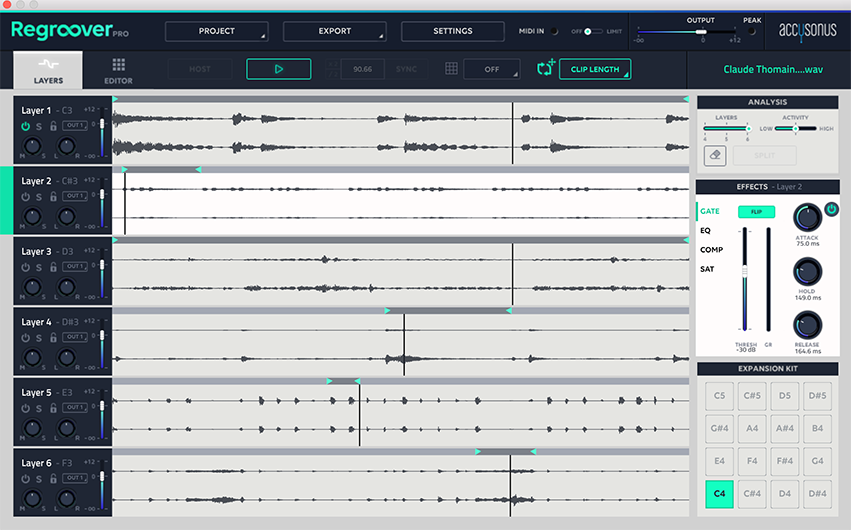 Works quite well with Cubase 9.5. on a Mac running 10.11. No installation or activation issues and most importantly: no blacklisting. The plug-in has a very low CPU footprint.

The controls and GUI elements mentioned in the manual perform as defined without issue. Nothing unusual about the parameters or choices of parameters. No surprises here.

The composite playback of the split layers is quite good. When sync’d simultaneously against the source loop, there is some minor “phasey” delay (expected because of processing round trip) but when A/B’d, I couldn’t really detect any artifacts introduced from the process. 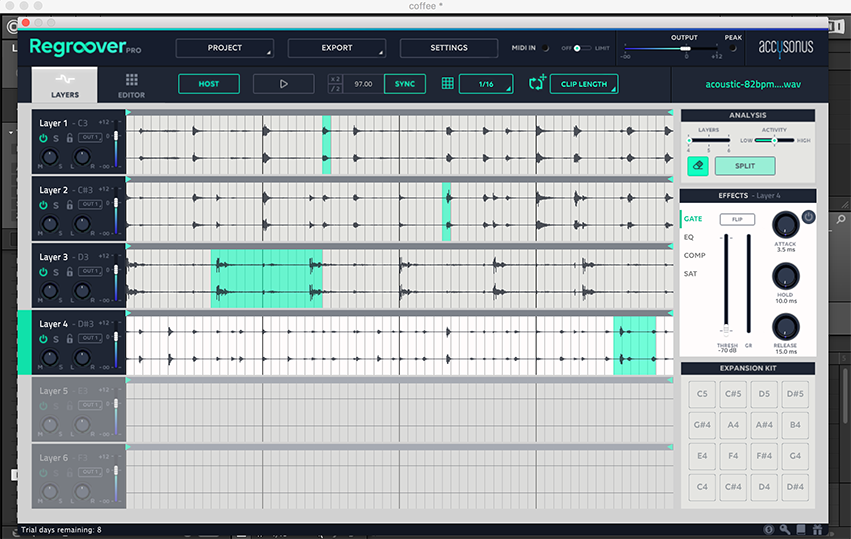 A brief explanation of what is does:

Dragging a loop into its window initiates an analysis determined by two controls: Layers and Activity (for adjusting the analysis to simple to complex material).

By default, it will split a loop into four layers. It can be re-analyzed to add up to two more layers. The analysis takes its best guess on what gets placed on a layer and for most common drum loop material, it makes the right choices. Control over the Layers includes an On/Off button, Solo, an M/S control, Gain, Pan and Output Routing. Additionally, there is an Effects section, providing Gate, EQ, Compressor and Saturator controls. While fairly minimal, they do a good job with no surprises.

Regroover also incorporates a 16 pad Expansion Kit interface that permits individual samples or selected Layer regions assigned to them, to be MIDI triggered along with the analyzed loop elements.

On a troublesome vocal track, where I had all but given up on compression to even it out (resorting to painstaking gain riding automation), I inserted the Vocal Compressor. It took all of about 30 seconds to finally get that track to sit perfectly in the mix.

After the loop is split, it can be “regrooved” by setting Layer Markers along the timeline for each Layer lane. Great for mashing it up or simply reducing a large loop to a smaller segment.

There is also an Annotation Tool that can “erase” selected sections of layers. More on this later. 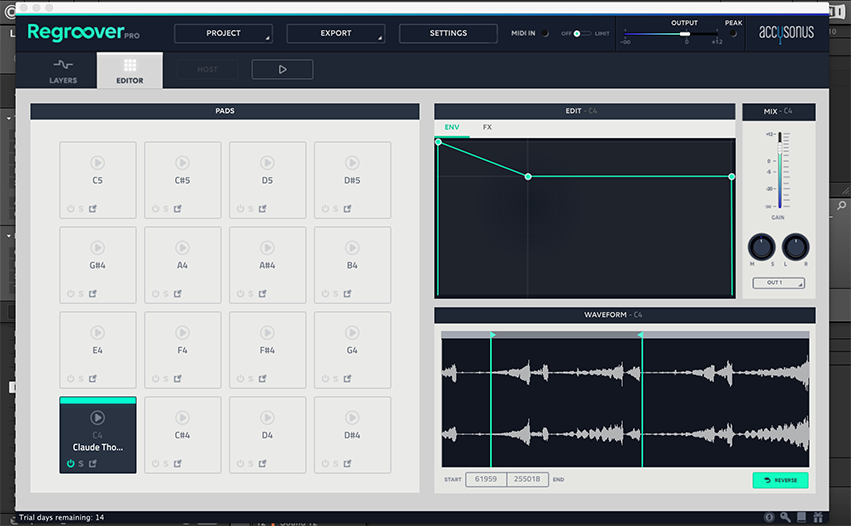 all the stuff I'd like to see in an update...

Nitpicking aside, Regroover does what it is designed for quite well. Its ability to intelligently divide a drum loop into distinctly identifiable components without artifacts is uncanny. Using hardly any CPU to do it is a big plus. The interface, for the most part is intuitive and I found it only necessary to crack open the manual for some of the finer points. Remixers, Sound Designers and DJ’s should love this.

Please note that I used loops of my own to test and didn’t dive into any of the available expansion bundles.