I’m not sure where to begin talking to you about Blue Cat’s PatchWork. I can tell you what it does. What it can do is quite literally up to you. It’s a “universal plug-in patchbay and multi FX” capable of hosting up to 64 VST/VST3, Audio Unit or native plugins. It can operate both as a standalone and a plugin itself, in both effect and instrument modes.

And so when I say I’m not sure what to say about it, it’s because it is such an open-ended architecture that to demonstrate its capabilities to their full extent I need a lot of imagination and creativity. I’m just going to assume that you, as a producer, engineer, musician, or composer have more of both of those than I do. So I’ll start with the things I thought I might do with it as they occurred to me, without worrying too much about how obvious they might be to you.

The first thing that happened was that concurrent with my firing up PatchWork for the first time, I was also looking at a very interesting and powerful plug-in synth that wasn’t available as a standalone app. And as a Logic user (and I’m sure this applies to most DAWs), I can’t imagine there’s anyone out there who hasn’t had at least one experience of not really wanting to fire it up.

DAWs are big, powerful applications, and they need lots of space, and lots of interface real estate and menus and whatnot to do their thing. And sometimes you just want to play a virtual synth without the feeling that it’s taking over your whole computer. Well PatchWork, as a standalone app using its most basic preset – “Wrapper” – will solve that problem for you handily.

If you’re on a Mac, as I am, you may not tend to think much about VSTs. But I have a few older plug-ins that used to work on my system which no longer pass validation due to Apple (with the best of intentions) locking out vendors who are not Apple authorized. I’m not suggesting that it’s a great idea to do an end-run on your operating system’s security protocols, but I’m pretty sure the authors of Cassette Drums aren’t trying to steal my data. And while their non-validating AUs won’t run in PatchWork, the included VST versions work fine – so I can hear them once again in Logic Pro.

I’m sure we’ve all stored our favourite plug-in chains as presets in our DAWs of choice, and while it’s a boon to productivity, it may not be helpful if you want to switch to another DAW. This is where PatchWork can act as a virtual “lunchbox” – in the same way that 500-series lunchboxes let you configure channel strip components however you want and take them wherever you need them. Set up a chain in PatchWork, save it, then create an instance of PatchWork in whatever DAW you happen to be working in and load it up.

So far we’ve been talking about some pretty basic, though useful, patches. PatchWork is capable of much more than your average channel strip, however. A single PatchWork patch can house up to 64 plugins with up to 8 parallel chains. That’s a lot, and certainly more than I think I would ever use – but here are some basic examples that begin to scratch the surface.

Parallel compression is an obvious first stop here, but clearly you can create parallel chains with any type of plugin. Bi-amping with amp simulators is also an option that leaps to mind – but you don’t have to stop at two amps, as you can have as many as eight chains in parallel (oct-amping?) You can then create custom macros to control multiple plugin parameters with one dial, and design an interface that makes the most sense for your workflow. Each of your parallel chains also has a solo switch for quick A/B-ing. And because PatchWork can also operate as a virtual instrument, you could have as many as eight virtual instrument plugins running in parallel, to create the ultimate virtual synth stack, complete with effects on each layer.

With the introduction of macros, PatchWork opens up a universe of possibilities for taking your own favourite “secret sauce” plugin chains and turning them into your own custom plugins. In my case, I have a favourite mastering chain based on some compressors, limiters, EQs and tape simulators. I can now package that up into a single PatchWork preset and create my own interface (using a selection of custom knob styles), so I’ve got my own “black box” mastering plugin with controls for the parameters that I use most often for the chain. You don’t need a degree in electrical engineering to create an arsenal of tools this way, you just need to know what works for you.

In addition to being a powerful and flexible host for all the plugins in your system, PatchWork comes complete with its own collection of built-in effects. There are over 30 in total, including a variety of pedalboard standards, channel strip necessities and more, ranging from Chorus and Flange to Multitap Delay, Harmonizer, Compressor, Gate and EQ. In fact, even in the unlikely event you have no plugins at all, PatchWork includes enough of its own effects to populate over 100 channel-strip and multi-effect factory presets for you to explore. 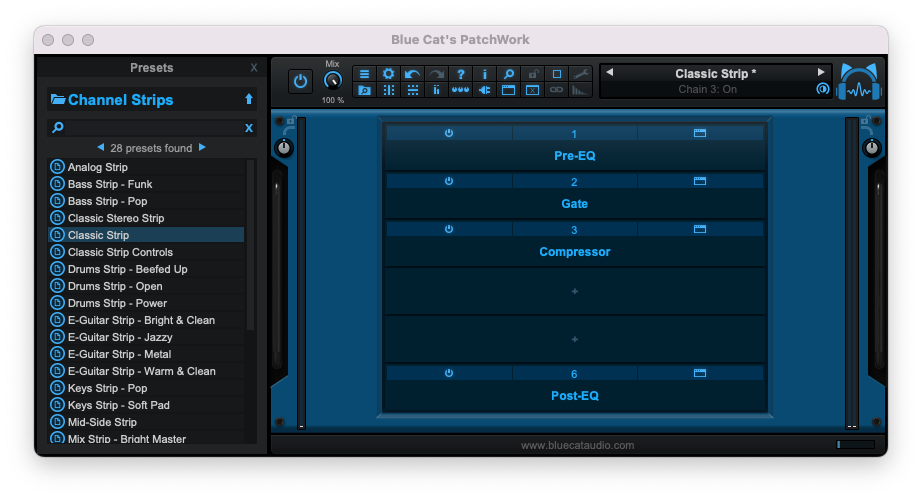 As PatchWork is itself a plugin, you can nest PatchWork instances within PatchWork presets to create complex chains quickly and easily, which is something you can’t do with a channel strip preset. And if you end up going a bit overboard and pushing the limits of your processor, you can use PatchWork in combination with Blue Cat’s Connector to turn a remote computer on your network into an outboard effects processor, effectively offloading processing to another CPU in your studio.

I really didn’t know what to expect from Blue Cat’s PatchWork when I first fired it up, but I quickly went from wondering what I would do with it to trying to think up new and creative ways to use it in every track. We say this a lot about creative software, but in the case of PatchWork, the possibilities truly are limited only by your imagination and the plugins you have in your system. It can be a powerful creative tool on one hand, and an indispensable workflow aid on the other – allowing you to organize and catalogue your favourite effect combinations for easy recall, and fully explore the potential of any plugin in your library.