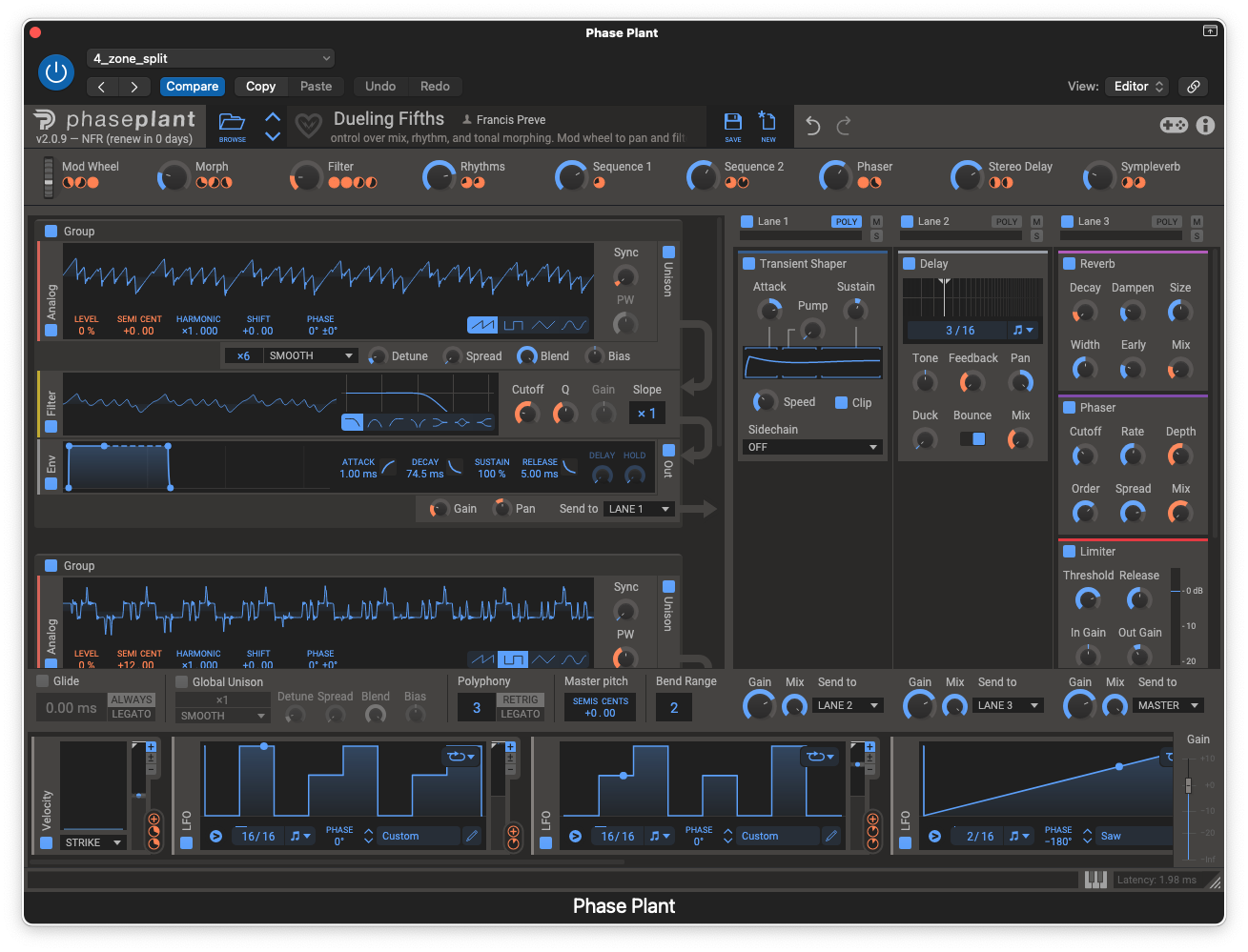 I will admit up front that I have had modular synthesizers on my brain for a good portion of my adult life, and so when I first heard about Kilohearts Phase Plant, a semi-modular softsynth, part of me was expecting to see a virtual wall of knobs, jacks and wires when I fired it up for the first time. Phase Plant is something very different, though it takes many basic modular principles and runs with them, fast and far.”

At its simplest, Phase Plant is a host for a wide range of modules from the Kilohearts ecosystem, many of which are shared with their multiband processor Multipass and their multi-effects plugin Snap Heap. The interface is divided into three sections: the Generator area on the left is for various types of sound sources and filters, the Snapin lanes are for effects, and the Modulator area at the bottom is for LFOs, Envelopes, and other control signals. And much like a hardware modular synth, there’s some crossover in function of various modules, as audio rate sources can also be used as control sources.

At first glance, the list of available audio generators seems pretty straightforward: virtual analog waveforms, wavetables, samples, noise. But each of these options has layers like an onion, and by the time I was finished exploring them I was hard pressed to come up with a type of synthesis that Phase Plant isn’t capable of reproducing. 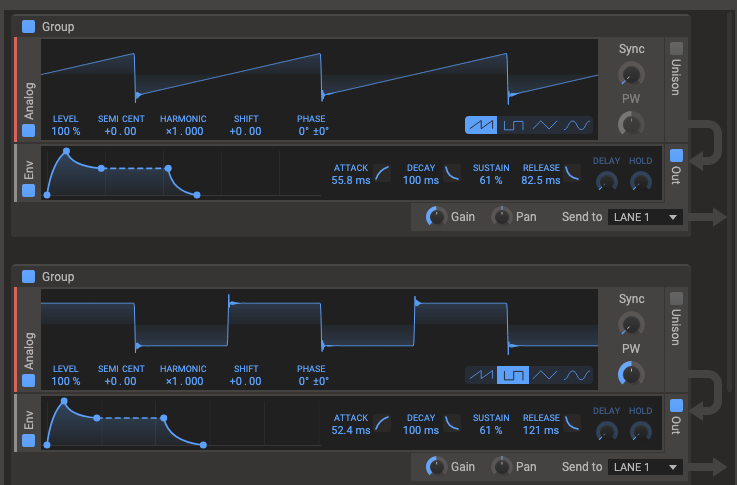 The analog waves, for example, sound crisp and true, and can be stacked, detuned, hard-synced, pulse-width and ring-modulated, and then run through a multimode filter with a variable slope to emulate your favourite analog beasts from days of yore.

Then consider the fact that, in true modular form, you can route audio-rate modulation from one generator to another to replicate the brash or bell-like FM sounds from the generation of synths that followed. Generators have separate control inputs for Frequency Modulation and Phase Modulation, the latter being essential for recreating classic FM synthesis-type sounds.

The Wavetable generator offers you access to several hundred (honestly I lost count) wavetables. Each table contains 256 frames, each frame being a unique waveform. That’s a lot of harmonics to choose from. The source material ranges from acoustic sources to esoteric, evolving textures. You can use the modulation source of your choice (envelopes, LFOs and the mod wheel are a good place to start) to scan through them, or use a tempo-synced stepped LFO to create wave sequences.

Phase Plant also includes a full-featured wavetable editor, which allows you to draw or generate your own wavetables, or even import and convert samples to wavetables. This opens the door to emulating a studio full of 90s-era wavetable synthesizers. You could even design your own additive tables and build an additive synthesizer from scratch.

The Sample Player generator allows you to incorporate samples from the supplied library or from your own collection. You have full control over start points, loop points, and a handy cross-fade control that eliminates those annoying non-zero-crossing pops. In combination with the near-limitless modulation options, you can also take this generator in some interesting “transwave” directions – one well-known synth manufacturer’s term for changing sample loop points in real time.

Things continue to get more interesting in the Modulation area. Here you can assign LFOs (including wavetable-based LFOs), envelopes, “curves” (a type of complex envelope generator that uses points and curves rather than the standard ADSR format) and random elements. You can also create MIDI input modules, which allow you to assign note values, velocity, aftertouch, controller numbers and more to whatever parameter you choose. 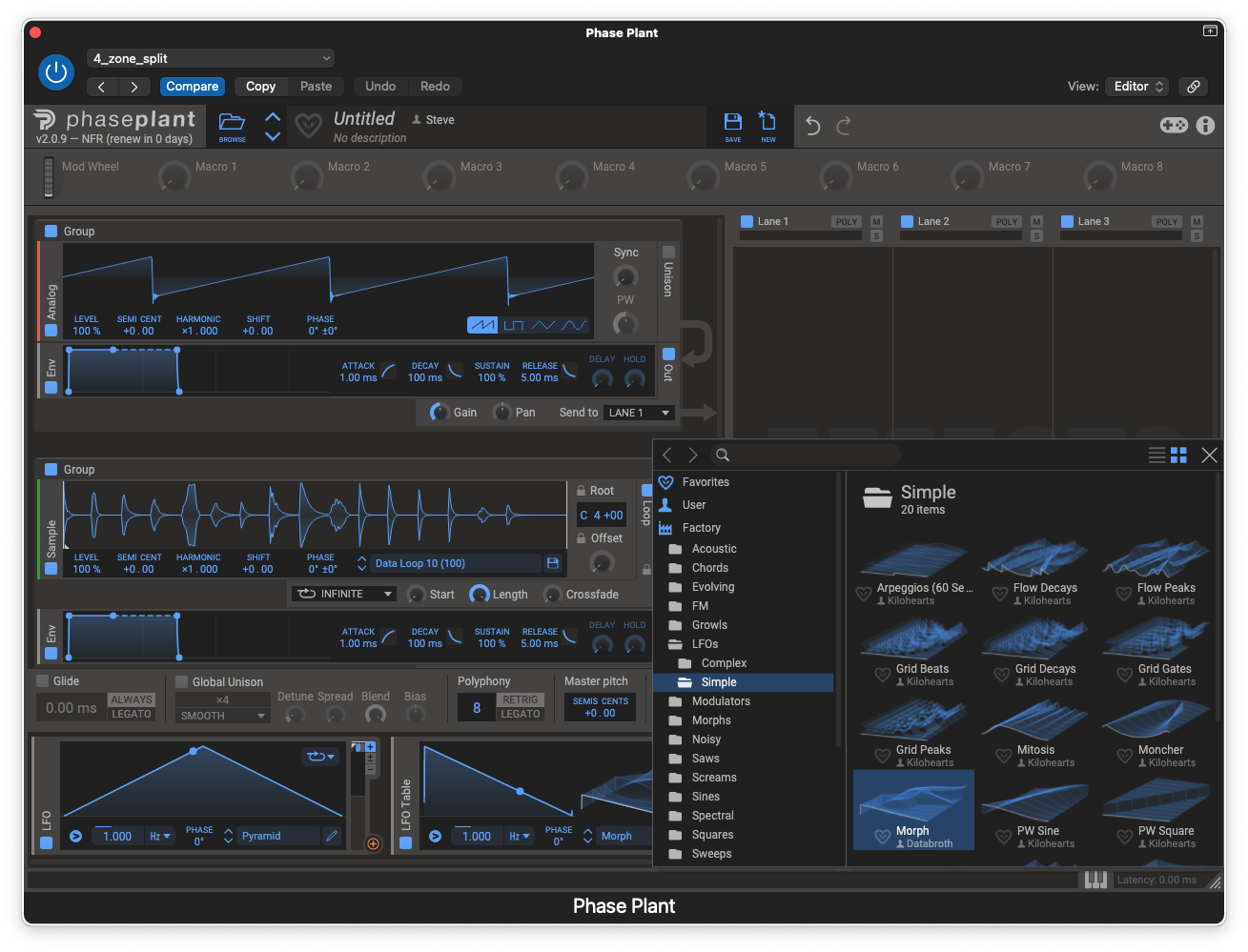 This area is also home to a variety of utilities for remapping scaling and limiting values, as well as adding audio inputs for envelope and pitch tracking. You can add up to 32 modulators in the modulation lane, combining them to create functions ranging from simple to complex. Modulators can also be ganged up and controlled by one of eight Macro knobs near the top of the window, which can in then be controlled from any input source you choose.

Audio output from the Generator section is then routed to the Effect Lanes, which can be populated with effects from Kilohearts Snapin ecosystem. These three lanes can be organized in serial or parallel, and in a rather novel twist effects can be used in polyphonic mode, which can help you create some strikingly rich textures. Imagine, for example, having a distortion unit on each note of a chord rather than on the summed output. 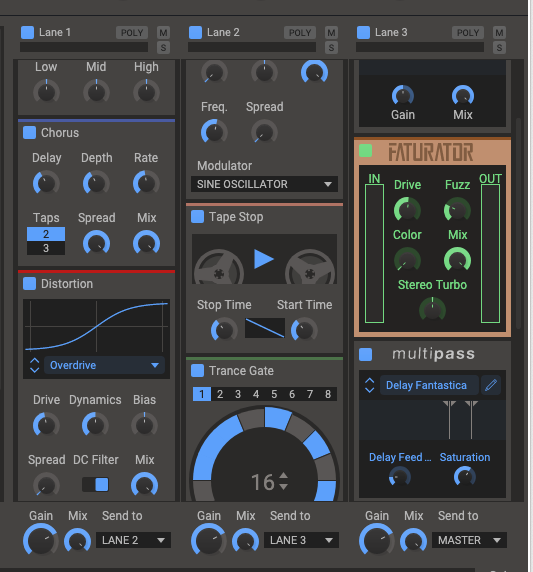 Effects available from the Snapin system include the Kilohearts essentials collection, which includes over 30 effects ranging from EQ and distortion to modulation and delay, chorus, filters, and the extremely fun Trance Gate. Additional Snapins include the Convolver convolution reverb, Faturator tunable distortion, and the 31-band Carve EQ with reference and match features. You can even add in Kilohearts’ Multipass and Snap Heap hosts as effects.

If that sounds like a lot, you’re not wrong. I was pleased to discover that Snapins have an individual patch load and save feature, so that you don’t have to start from INIT values when you load one in – you can browse presets for each effect or create and save your own.

Phase Plant is that rare virtual instrument that’s immensely powerful and deep yet fun and easy to explore – more so than my Eurorack in many ways. There are no wires to block your view, and true to its semi-modular nature, you can start playing your generator modules as you drop them in, as the default audio routing is done for you. Routing MIDI from hardware is also dead easy. Drop a MIDI CC module into the modulator area, click the controller input bar and turn a knob.

That doesn’t mean that everything is easy though. I had some trouble figuring out how to create zones in the Generator area, in order to map multiple samples across a single patch. I ended up finding a solution posted by another user on their lively Discord server, proving it can be done. But even with that patch in front of me, I haven’t yet figured out precisely how it works.

The user interface is very dynamic, featuring live displays of waveforms, filter outputs, LFOs and envelopes, so that at a glance you can see what’s being triggered and what phase it’s in, what it looked like before it went into the filter and what came out the other end. And it’s all real time – turning your screen into an almost mesmerizing display of cross-modulating waveshapes. And I was particularly pleased to see support for MPE (MIDI Polyphonic Expressions) input, as I’ve recently acquired an MPE-capable controller. 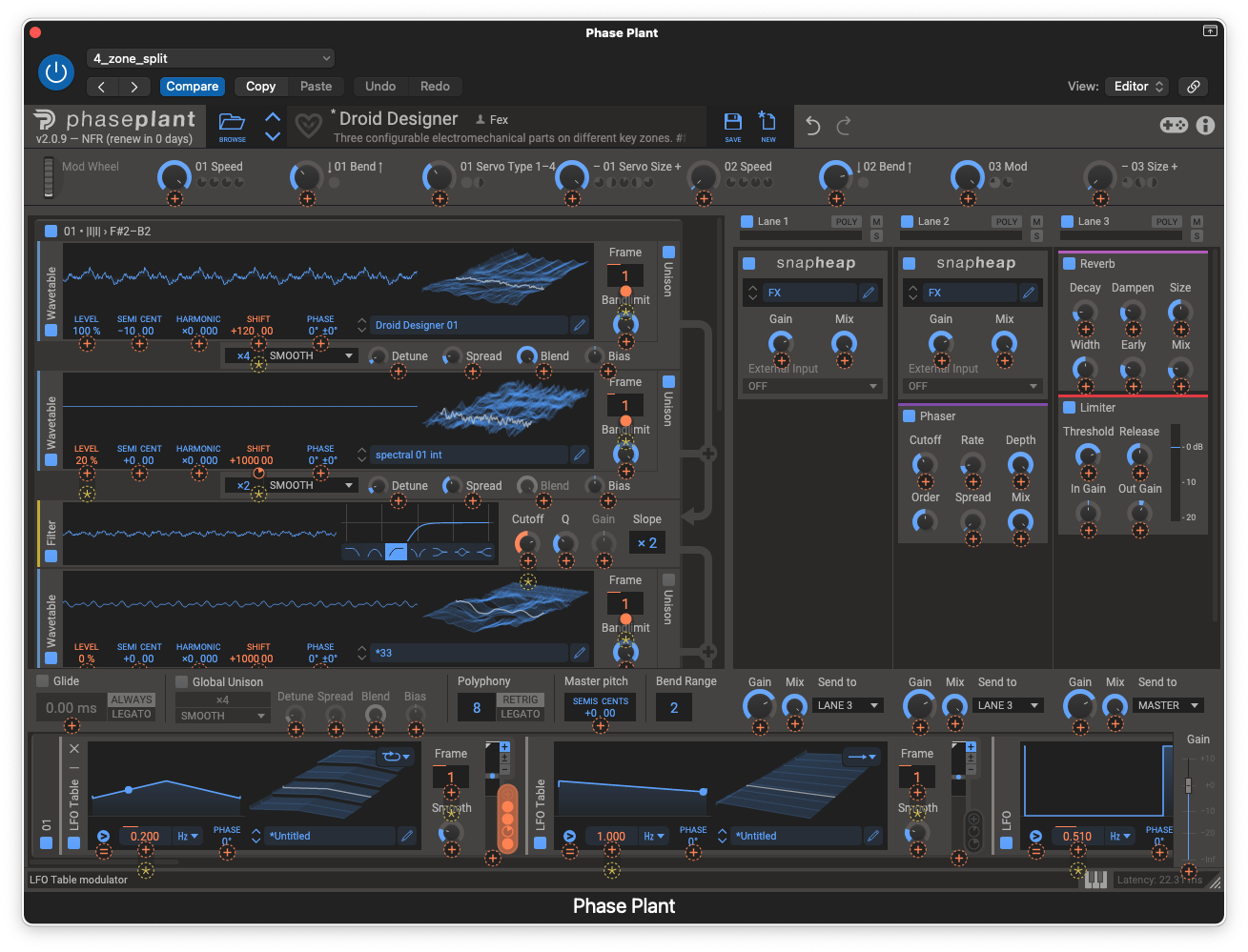 Phase Plant really surprised me. If it was just billed as a very capable wavetable plugin, that would be impressive enough for me. But there seemed to be a new synthesis type around every corner. Plus you get everything I love about modular – patching virtually anything to anything else just to see what it sounds like – with the freedom to build a synth as large as your system can handle.

Just like with a hardware modular though, it is possible to go a bit overboard. Over the course of taking Phase Plant through its paces, I ran across a third-party patch that sounded pretty great monophonically but would choke up my 2018 Mac Mini after about three notes of polyphony. I unpacked the oscillator lane and found the designer had stacked twenty sampled waves on a single voice (ten per side with a stereo spread). As expected, removing a few of those sample generators had virtually no effect on the overall sound and eased the processor load substantially. I can’t help but think that was the work of a sound designer just trying to see how far they could push the envelope.

I’ve only scratched the surface of the potential of Phase Plant, but I hope I’ve given you a sense of the worlds of sound design waiting in this synth for you to explore and create. I was really impressed with the breadth of sounds available in the generous library that comes with it (as well as the myriad third-party add-ons), in particular the cinematic scope and depth that’s possible. And creating new sounds with Phase Plant is not some dark art – the super-friendly user interface and real-time visual feedback make it easy to construct complex patches quickly without losing track of what’s going on where.