The house I grew up in had an old Sterling upright piano, made sometime in the early 20th century. My parents encouraged my curiosity about it, and never flinched when I removed parts of it to look inside to try to figure out how it all worked. I’d put staples and tacks into the hammers to elicit new and interesting sounds, or silently depress keys and strum the undampened strings with guitar picks. It was the beginning of a lifelong fascination with sound, and a sense of awe about the complexity of pianos in particular.

When I first started exploring Pianoteq Pro, I found myself thinking about the insides of pianos for the first time in a long while. Because unlike the sampled piano sounds that I’ve been making do with for decades, Pianoteq Pro does not represent a snapshot of a piano someone recorded in a studio at some time in the past. It’s a physically modelled instrument (a collection of instruments, in fact) that simulates “the playability and complex behaviour of real acoustic instruments,” according to the Modartt website. The sounds it makes are produced in real time using a complex mathematical model. 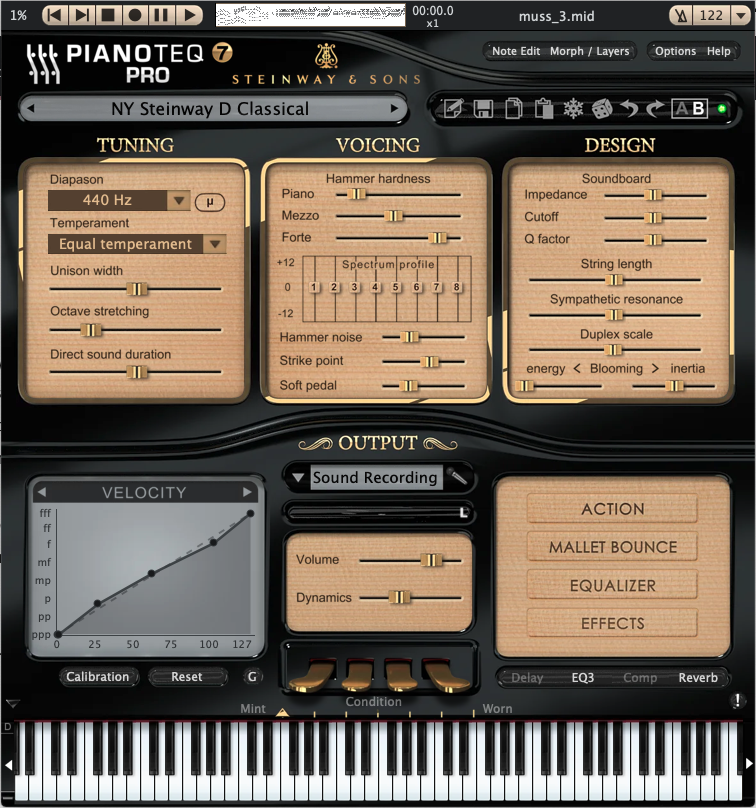 Conceptually, a modelled instrument has a number of advantages over a sampled one. Drive space is the first that comes to mind – a quick survey of the sampled instrument marketplace turns up instruments weighing in at anywhere from 7 to 240 GB. Pianoteq Pro 7 weighs in at just under 50 MB.

More significantly, physical modelling allows Pianoteq Pro to produce a uniquely nuanced sound in response to every variance in velocity or pedalling. So rather than being limited to the number of velocity layers in a sample set, you get an appropriately modelled sound for each of the 127 velocities produced by a typical MIDI controller. Pianoteq Pro will even respond to high resolution MIDI, though I don’t have a high resolution controller myself.

In a final comparison to sampled instruments, as Pianoteq Pro isn’t limited to a static sample set, it’s capable of being tweaked and manipulated to create a near endless variety of piano sounds, to emulate a wide variety of pianos, as well as an extensive list of keyboard and tuned percussion instruments.

A list of theoretical and potential capabilities can only take us so far, of course. The sound and playability of the instrument is the ultimate test. And the sound is, in a word, amazing. As of version 7, which included some refinement of the physical model, a newly developed New York Steinway Model D virtual concert grand was introduced into the lineup, and it is a truly exciting instrument to play.

When I try out a digital piano simulation there are always things I listen for in particular. Are the highest notes woody and reverberant? Are the lowest notes brassy and hairy? Do both ends merge seamlessly toward a midrange that is clear, powerful, and dynamic? Are the pianissimo notes delicate and dreamy? Pianoteq Pro’s pianos deliver on all counts.

There are a great variety of models to choose from, including a Bluethner which I was quite interested in for its famous resonant Aliquot string system (there’s a dedicated control for it in the Design section when the Bluethner model is selected). They’re all impressive, but I kept coming back to the New York Steinway – it’s a show-stopper.

I had a moment’s hesitation when auditioning the pianos at first. There’s a certain liveliness I look for in the midrange, an organic, evolving quality that I felt was missing. I found my answer in the unison width setting, which allows you to control the tuning spread across a note’s strings. It seems I may just be more accustomed to a slightly out of tune instrument – at least compared to the instrument modellers at Modartt. The Freeze function allowed me to apply my preferred unison width setting to each preset I auditioned without having to reset it each time. This convenient option can be applied to any combination of settings.

I started out looking for classical MIDI files to test the various instruments (Pianoteq Pro includes an integrated MIDI file player and recorder), but quickly became more interested in the experience of playing rather than merely listening. I dug out some of my old classical piano books and got to work. The point when it occurred to me to take advantage of the calibration feature, which calibrates the velocity curve to your particular controller and playing style, was a revelation. It really opened up the nuance and dynamics of the instrument, particularly in coaxing some impressionistic character out of the softest pianissimo notes.

The tuning panel, where the Unison width control lives, is merely the tip of the sound design iceberg (though for the record, it includes an octave stretching control, a variety of native temperaments, and supports Scala file import for advanced users). Pianoteq Pro’s documentation describes the application as a “Piano Factory,” which is fair to say, given the extent to which you can control not only tuning and voicing, but also the “physical” characteristics of your virtual instrument. The Design controls include the impedance of the soundboard, which will determine how long a note will last, and the string length, which can be increased up to 10 metres. Pianoteq Pro allows you to make all these adjustments on a per note basis, if you’re so inclined. 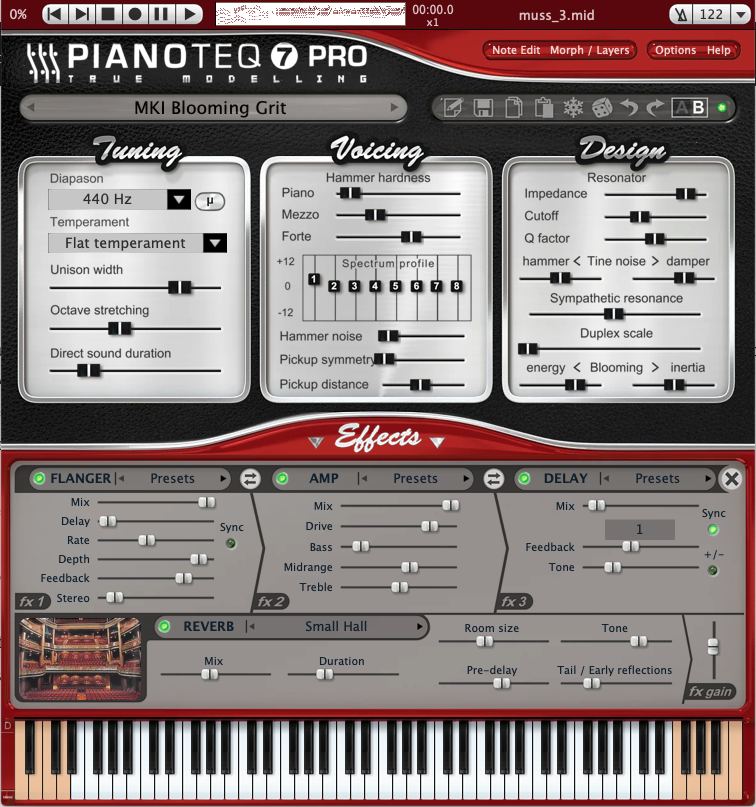 Pianoteq Pro offers a variety of convincing instrument models in addition to acoustic pianos, including harpsichords, harps, electric pianos, Hohner Clavinet and Pianet models, chromatic percussion, historical pianos and bells. I felt the Clavinet sustain was longer than most Clavs I’ve played, but in all honesty I generally wished the real thing sustained longer – and it’s a trivial matter to adjust in Pianoteq Pro.

The Vintage Tines MkI electric piano was warm and dark, true to life. I didn’t hear the “Dyno” hard hammer mod in any of the presets and went on a bit of a quest. It took a lot of fidgeting with the spectrum profile but I think I’m almost there. The Vintage Reeds W1, which, to be clear, is not claiming to be a particular brand, was probably the least like the instrument I expected it to be, but even so, the W1 Tremo patch was certainly in the ballpark.

There are quite a few patches for the Vintage Tines model that really stretch the sound design capabilities of the instrument, and in particular showcase the effects processor, which features a variety of delay, modulation and filter effects, an amp simulator, and a convolution reverb that allows you to load in your own impulse responses.

The Morphing and Layers options are new as of version 7, and offer even more sound design and performance possibilities. Layers allows you to stack up to three instruments together and control the balance on a per-note basis for complex splits or pitch-based crossfades. Morph allows you to create completely new hybrid instruments by morphing as many as eight instrument models together into one. If you’re in need of additional fuel for inspiration, you can randomize your source instruments with a single click. 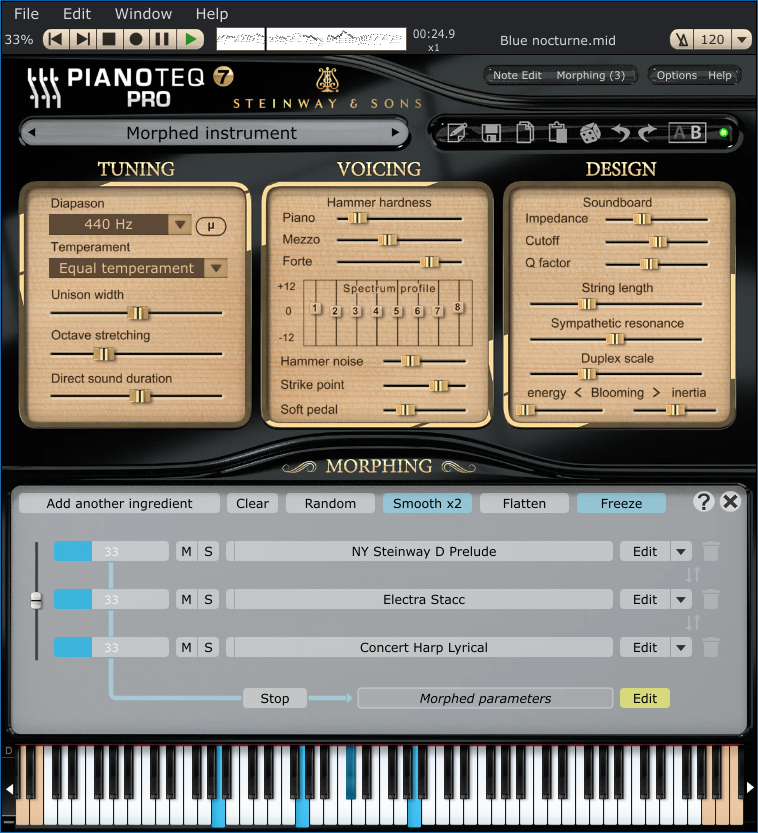 What I liked: Pianoteq Pro sounds fantastic. I would love to do some A/B tests with actual grand pianos to find out how close it really is to the real thing. Harps, harpsichords, clavinets, bells and most metallophones also get full marks. And beyond the emulations of real world instruments, the sound design potential is quite vast, particularly with the Morph and Layer options.
What I’d like to see: I think the interface is due for an update. It would be great if there were re-sizing options that allowed you to bring more elements into view at once, rather than just scaling (though the available pop-out windows for certain editors are helpful). A few non-piano presets missed the mark for me, though I found I could get them close to what I wanted to hear with some tweaking.
Overall: Pianoteq Pro outclassed every virtual or digital piano I’ve tried so far. It’s very exciting to play and program, and it clearly has a deep well of sound creation possibilities within it. If you’re serious about piano emulation – or virtual instrument design – you should definitely consider adding it to your sonic arsenal.