I was sitting next to the engineer in a mobile recording studio, sometime in the nineties. A band I was playing in had just finished tracking a demo and we were starting the mix. “What I want for the kick drum,” the drummer said, “is a big, booming, pillowy sound, like a marching bass drum hit with a soft mallet.”

The engineer lowered his head slightly and a hand moved up to massage his temple. We were recording to ADAT machines at the time, and our ability to “fix it in the mix” was limited. But here we are today, in the third decade of the twenty-first century, and while it’s clear that technology can’t solve all our problems, if there’s a drum sound that hasn’t been recorded to your liking, we might be able to do something about it.

Send in the replacements

I reviewed Steven Slate Drums 5.5 here recently and was quite impressed with the quality and detail of the samples. Trigger 2 Platinum gives you access to many of the same high-quality samples in a cleverly-designed drum replacement plugin, enabling you to replace problematic drum recordings on an instrument-by-instrument basis – or, if you prefer, to augment your recorded drums by layering them with up to 8 samples from the Trigger 2 library. 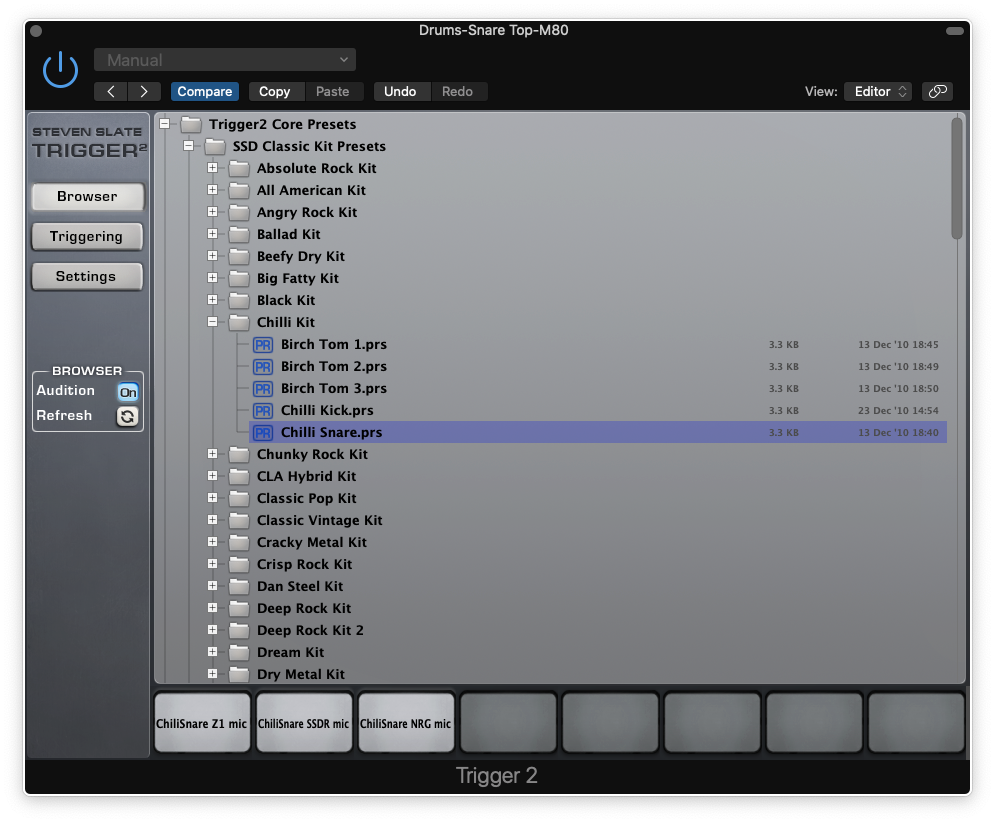 The basic operation of Trigger is very straightforward. I loaded up an instance on the snare track of a multitrack session and opened up the browser to select a new snare sound (you may want to load it on a bus to take advantage of the Leakage Suppression feature – more on that in a moment). You can choose from pre-assembled kits or individual instrument sounds. Presets, which can be identified by the *.prs extension, are already “stacked” with multiple mic placements which will populate multiple slots (channels) when double-clicked. Instruments with the *.tci extension can be dragged and dropped into individual track slots.

Flip into the Triggering mode and you’re presented with a live waveform view which shows the detail level – this is the threshold at which your audio track triggers the instrument samples – with red markers indicating which transients are above that threshold. The response of the instrument is controlled globally by a Sensitivity control that governs the plugin’s sensitivity to quieter drum hits, a Retrigger time which determines the minimum time to elapse before an instrument can be triggered again, and a Detail control to adjust the trigger threshold.

From here, Mixer view allows you to adjust levels, panning, and tuning of each instrument slot. You can also choose from the available articulations for the instrument here, such as rimshot or sidestick for a snare. Curves view lets you adjust attack, sustain and release times either for individual instruments or the entire group. Individual Dynamics, Velocity and Range controls in this view allow you to adjust the response of the instrument. You can also use this feature to create a velocity-switched instrument by adjusting the range so that certain slots only play over a particular velocity range.

Isolating transients from a drum performance is not always a simple task. When the drummer hits hard, the transient comes in hot, you don’t have much to worry about. But drums are recorded in the open air, mere inches from other drums. If leakage, or spill, from another drum is louder than the quietest notes you’re trying to capture – ghost notes on a snare, for example – simply adjusting a trigger threshold may not solve the problem.

The global Sensitivity control can go a long way in addressing this problem, allowing you to pick up quieter strikes at the higher settings. But you can also tell Trigger to ignore unwanted instrument sounds with the ingenious Leakage Suppression feature. Set trigger up on an Auxiliary/Bus channel, and send the instrument you wish to replace to the left side, and send audio from the unwanted instruments to the right side the bus. Then adjust the Suppression control to taste – or until only the drum you want is triggering samples.

Build your own kit

As I mentioned earlier, the samples included with Trigger 2 Platinum sound great, and presets include various articulations, velocity layers and round-robin hits to keep them sounding natural. Together with the available expansion packs, you’re not likely to be at a loss for the right professionally-recorded instrument sounds to use in your tracks. You may however have drum sounds on your drive that you like – or a favourite kit you’d like to have at the ready for future productions.

Happily, Steven Slate also offers the free Trigger Instrument Editor which allows you to create your own presets from third party samples or your own recordings. The drag-and-drop interface makes short work of assembling multi-layered round-robin instruments with multiple articulations, and can optionally calculate velocity switch points for you automatically. I didn’t have any samples on my own drive to compete with the factory presets, but playing around with TIE gave me a greater appreciation for the amount of time and the quality of the raw data that went into them.

Trigger 2 Platinum is a versatile tool that combines an intuitive interface with top-notch samples, allowing you to beef up just about any drum recording that needs a little help. The Sensitivity, Velocity and Dynamics controls allow you to retain the nuance and musicianship of the recorded performance, even if you choose to replace the original drum sounds entirely.

Aside from the quality of the sounds and the tightness of the timing, I was also impressed with how easy it is to use. I dove in without the manual on the first try, inserting it on a snare track and browsing through the sample library, and got a very usable result almost immediately. So if you’ve ever been frustrated by a drum track that’s not quite up to your standards, you should definitely give Trigger 2 Platinum a try. It could easily save you a lot of time and money in the studio – potentially in cases where a do-over might have been the only other option.