According to u-he, the ‘D’ in Diva stands for “dinosaur” – as in “Dinosaur Impersonating Virtual Analogue synthesizer.” After spending some time with the popular plug-in, I think it could just as easily stand for “deceptively simple” – because every time I get a little bit complacent with it, assuming I have a handle on its capabilities, I discover something new, and enter another rabbit-hole of sonic exploration.

That’s not to suggest that Diva isn’t approachable and easy to use. In fact, it looks and behaves so much like a hardware synthesizer you’ve programmed in the past that the potential lurking behind the panel might not be obvious at first glance. But after flipping through the generous library of factory patches – and creating more than a handful of my own along the way – I began to understand why Diva continues to appear on so many top 10 analogue emulator lists nearly a decade after its initial release. 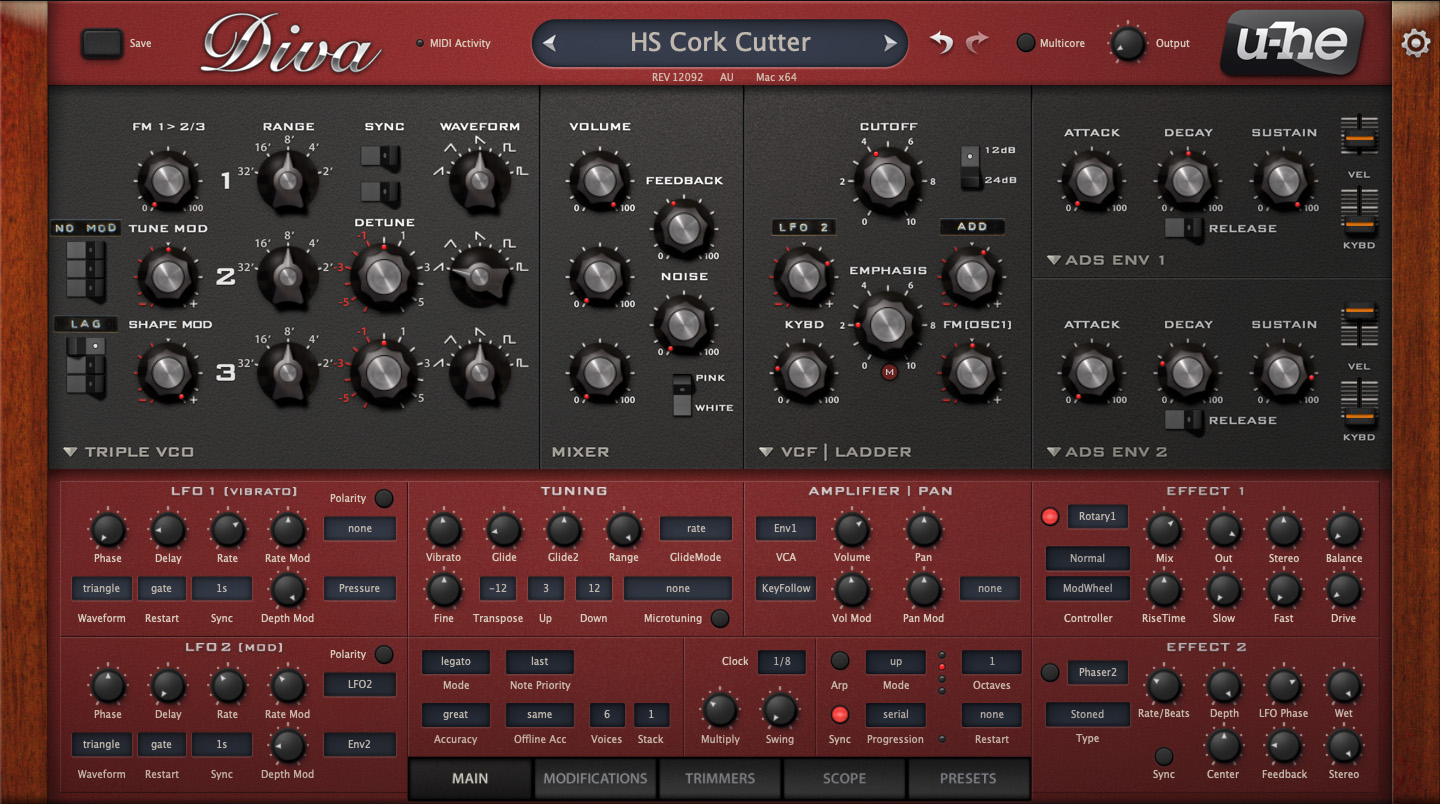 Diva’s novel approach to analogue emulation draws on a quasi-modular approach. There are no patch cables to contend with, but the primary components, i.e. oscillators, filters, and envelope generators, all have a variety of flavours to choose from. The design and sound of these components are inspired by real-world hardware synthesizers which, while not named, are easy enough to guess (particularly if you take a peek in the Templates folder, which includes names like “Jupe-8” and “Minimono”).

Together, the range of options spans from the analogue monosynths of the early 70s to digital modelling synths of the late 90s. At its very simplest, you could create a faithful rendition of your favourite Minimoog patch, but if you feel limited by the original ADR envelope generators, you can swap out either (or both) for the ADSR version. This flexibility also extends to a total of five oscillator modules (including VCO, DCO and digital oscillator emulations), three high pass filters (plus a feedback only circuit in this slot), five low pass filters (including a multimode filter) and three envelope types to choose from. For added authenticity, the Dual VCO and Bite VCF modules allow you to select different hardware revision options, each with their own distinct sonic character.

The sound of science

Speaking as someone who grew up on subtractive synthesis, the sounds that Diva produces are exceptionally true to their hardware origins. u-he credits “realtime circuit simulation” and “zero delay feedback design” for the sound quality, which gives a non-engineer like me only the vaguest sense of what they’re up to. My first stop in judging an analogue emulation is the filter, and Diva offers everything from creamy smooth ladder filters to multimode and state variable options. I particularly enjoyed driving the Uhbie filter into self-oscillation – at its furthest extremes the resonance had a very convincing edge of chaos and unpredictability, just as you’d expect from the real thing.

The oscillators provide a great deal of variety as well, and are each distinctive in their own way. Diva includes an oscilloscope to help you see exactly how they differ (I wonder if a certain hardware manufacturer didn’t take a cue from that design feature a few years ago). I found the scope very helpful when I was getting a handle on the digital oscillator in particular, which offers different wrapping, shaping and feedback controls, in addition to the much sought-after “super saw” waveform.

Regardless of the configuration you choose in the upper half of the panel, all patches can make use of the controls and modulation sources in the bottom half, including two LFOs, two effects processors, and an arpeggiator. Clicking the Modifications tab reveals even more modulation routing options, including virtual CV processing functions that allow you to manipulate control sources in a variety of useful ways. You can multiply or add signals together, quantize them to create stepped signals from smooth, or apply lag to smooth out square corners.

The Trimmers panel is a real treat for analogue afficionados. Here you can use Oscillator Voice Detune to adjust the tuning of each oscillator in each voice, simulating the unique variations among individual voice chips in a polyphonic synthesizer. The Voice Map Modulator lets you map per-voice variations to other destinations as well, like filter or panning. And if that’s not vintage enough for you, the variance controls let you dial in additional randomness to filter cutoff, envelope time, pulse width or glide.

And for those of you who occasionally feel three oscillators is not enough for the lead sound you have in mind, the Stack option lets you stack up to six voices on one key for up to 18 oscillators on a single note. You can then retune or transpose each voice in the stack up or down as much as two octaves to create ultra-thick leads or one-finger chords.

All of this power comes at a price, and Diva can be pretty demanding in terms of CPU usage. u-he is quite up-front about this on their website and in throughout the user manual. To be honest, I didn’t think it would be an issue on my multicore Mac Mini. But due to my dogged insistence on keeping Diva in its most accurate and CPU-hungry mode, “Divine,” I gradually became aware of how much of my CPU background tasks were using, and I occasionally had to manually cancel some unrelated processes in order to get uninterrupted performance from Diva.

Coincidentally, while I was putting Diva through its paces, u-he released version 1.4.5, which promised an improvement in CPU efficiency and native support for Apple M1 processors, among other things. In what was by no means a rigorous scientific experiment, I found I could run more than twice the number of live instances after the upgrade without glitches as I had before. Your mileage may vary, of course, depending on which patches you’re using, oscillator models, polyphony, and your processor type. If you do run into issues, the manual offers a number of CPU management tips to help mitigate the situation.

Diva sounds great, is deep yet approachable in terms of functionality, and ultimately it’s just plain fun to program. Speaking as a fan of analogue hardware, I appreciate the design approach and attention to detail as much as the authenticity of the sounds. Using the MIDI Learn feature, I mapped a useful number of controls from a Moog Sub 37 to corresponding controls in Diva and started tweaking. The preset browser makes it quite easy to find sounds in the library, allowing search by text strings and tags. The Favourites category offers eight colour codes to help you keep your selections organized, and the Auto Versioning option prevents you from overwriting patches accidentally by appending version numbers to patch names automatically as you save them.

The effects section may appear rudimentary at first but offers a good variety of options, from the modulation-type effects that once helped single-oscillator polysynths punch above their weight to delays, reverb and a convincing rotary effect. The Phaser offers a “Stoned” mode, which is clearly an allusion to the Small Stone Phaser made popular among synthesists by Jean Michel Jarre, and the Eminent string emulation in the factory library makes good use of it. It’s worth noting that Diva doesn’t limit your choices in the effects chain – you can use two instances of any effect in series if the need arises.

What I liked: I really enjoyed playing with Diva. I found some of its sounds so evocative of the instruments and recordings that I grew up with that I paused on more than one occasion to dig through my music library to find the track that it was reminding me of. Its thoughtful design does a great job of providing access to its programming depth through a friendly, clear user interface.

What I’d like to see: The only real frustration I had when testing Diva was the occasional drop-outs and loss of polyphony as I pushed my processor to its limit, but the v1.4.5 upgrade solved most of my issues. With that taken care of, what’s left of my wish list seems a bit trifling. I wouldn’t mind a few more LFO waveforms to choose from, or a third envelope generator in the Main page for pitch modulation duties. But to be fair, I haven’t explored every last option available through the modulation processors.

Overall: Diva is extremely versatile, and capable of recreating a wide range of sounds from what many consider the golden age of synthesizers. As the owner of a handful of museum pieces, it’s refreshing to be able to choose precisely how predictable each voice will be when I turn on a synth – rather than having entropy and time decide for me.