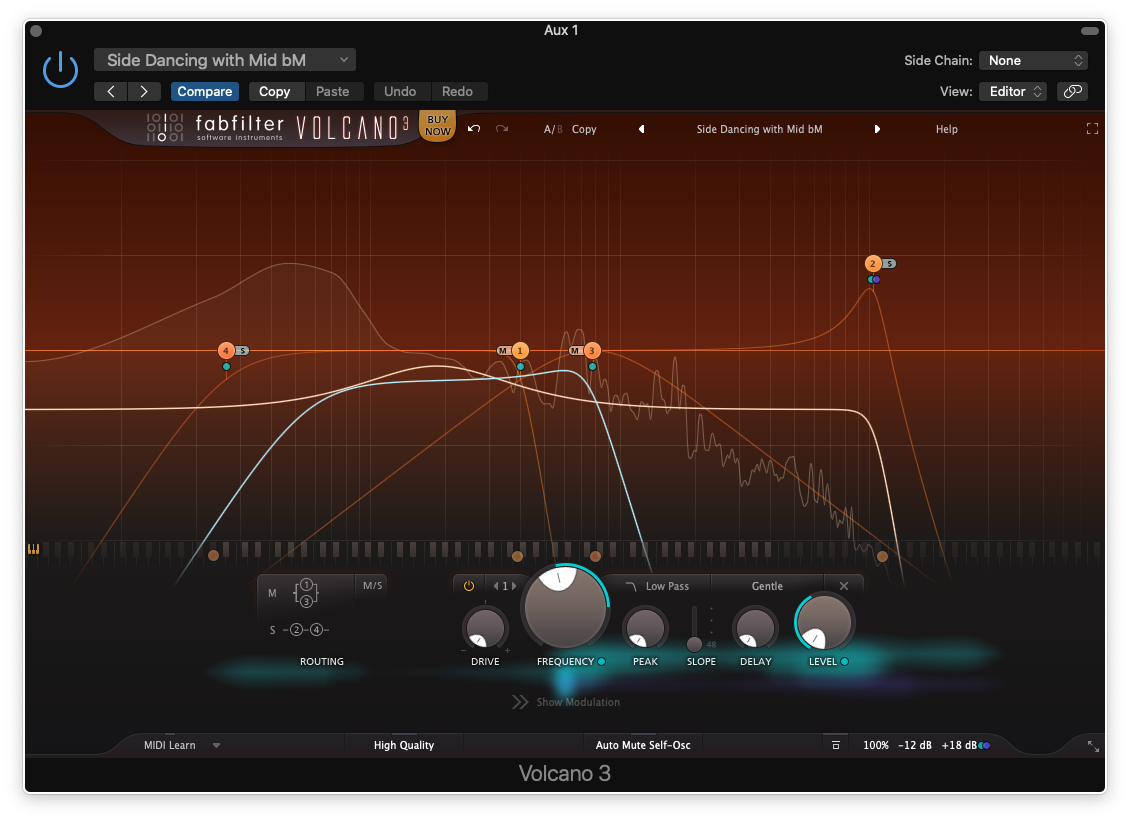 There’s a saying among modular synth enthusiasts: “You can never have enough VCAs.” And while the amplifier (the A in VCA) is an essential module, I’ve never managed to get as excited about amplifiers as I do about filters. Filters have vast sound-shaping and altering potential, and can truly define the character of an instrument or track. So I was quite intrigued when I was given the opportunity to check out FabFilter’s Volcano 3 – the latest incarnation of their popular filter plugin.

Volcano 3 offers a number of new features compared to its predecessor, including a newly redesigned interface, the introduction of four new EQ-style filter shapes, and the addition of a 6 db filter option. As a newcomer to Volcano, I’ll be taking a run at it from the ground up, with a particular interest in how it compares to the hardware filters I love – and what it can do for a mix in the digital realm.

The Volcano 3 interface will look familiar to users of FabFilter’s other products – particularly their Pro-Q 3 EQ plugin. The open, uncluttered display gives you a simultaneous view of up to four individual filter frequency peaks, a single curve representing their combined effect on the incoming signal, and a live spectral analysis display, in a lava-appropriate palette of fiery orange and red.

Adding a filter instance is easy. Simply double-click to create a filter peak, then drag it into position. Double-clicking in particular zones will pre-select a filter type for you, but a pop-up info window lets you make adjustments to filter shape and style, and enter precise values for frequency and peak. An optional keyboard display allows you to snap filter frequencies to scale tones, if that’s your jam.

In the analogue world, you’re lucky if you get a few filter slopes and curves to choose from. I look around my studio and see four slope options on one mono synth, but no band or high pass option. My most generously appointed modular filter offers me a choice of 12 or 24 db/octave slopes, in low pass, band pass, and high pass. By contrast, Volcano 3 gives you four slope options, from the new 6 db up to a steep 48 db, and as of this release adds “EQ-type” filter shapes – bell, low and high shelf, notch and all-pass – to the feature list.

As for character, that elusive quality that a filter imparts on a signal, a hardware unit, with its fixed circuitry, usually offers one. If you want to hear something different, you’ll have to switch to another filter. Volcano 3 offers you 11 filter styles in total, from Clean and Classic to Raw, Metal and Tube. The impact of the styles is dependent on a variety of factors, drive, peak and slope among them. And of course which style you choose will also depend on your source material, and your intentions toward it.

As the interface might suggest, there’s a lot of crossover between the Filter and EQ categories. At its heart, an equalizer is really a collection of filters, and the distinction between the two has as much to do with how we use them as how they are designed. Volcano 3 now has a few features that we generally only associate with equalizers.

Clearly, the newly EQ-type filter shapes edge Volcano into EQ territory. We also sometimes distinguish EQs and filters based on whether they boost as well as cut, and how much colour they impart to the source material. Volcano covers all the bases and more. In fact, Volcano 3 does a lot more than most people would expect from a filter, with the precision of a mastering EQ and the sound-mangling potential of a modular synthesizer.

The most obvious difference in how we use filters and equalizers has to do with modulation. When we pick a cutoff frequency, we don’t intend for it to stay there – we’re going to sweep it, apply envelopes and LFOs to it, and generally get it moving around to the music. Volcano 3 gives you a generous modulation section that lets you insert a wide range of modulation sources, including a highly configurable XLFO which doubles as up to a 16-step sequencer, envelope generators, envelope followers, MIDI, XY controllers and sliders. Modulation sources can be routed to just about any filter function, including Drive, Filter Pan, Peak, Delay, Output Level and Output Pan. Modulation sources can also modulate each other – you can route an Envelope Generator to the frequency of an XLFO, for example – opening up a whole universe of cross-modulation possibilities.

The XLFO deserves a few words of description in itself. Rather than a simple analogue-style waveform, the XLFO can be designed by the user with up to 16 editable steps, which can then be shaped with slope types as well as global and per-step glide controls. The peak value of each step can then be quantized to note values for sequencing and arpeggiator-type effects, or randomized dynamically to simulate sample and hold. The XLFO frequency can be cranked up to 500 Hz, well into the audio range, so FM resonance is definitely an option!

What this all means in musical terms is that a single Volcano patch can consist of up to four resonant filters sweeping, bouncing and snapping to your song’s master tempo, or in response to the input audio (or a sidechain input), a sequenced MIDI track, or the knobs and keys of your MIDI controller.

Volcano 3 comes with a good-sized collection of presets that run the gamut from static repairs and track correction to wild and dynamic automated stereo effects. For my money, the most fun you can have with it straight out of the (virtual) box is as a remixing tool. Load up your stems, set up a few instances on some busses, and start slicing and routing – the Complex preset category is a great place to find inspiration.

Recording and producing aren’t just about big gestures though, and if you have a more traditional stomp-box approach in mind for an individual instrument track, Volcano 3 has you covered. Add a vibey wobble to a lush pad, or turn a sub bass into a distorted howl. I set up a traditional auto-wah effect for a clavinet patch with an envelope follower in pretty short order, and couldn’t resist pushing the effect into cabinet simulator territory with the drive setting and filter style modes. Thanks to the XLFO, Volcano 3 can also replicate a variety of cyclical modulation effects, including stereo chorus, phaser and flanger emulations.

The ability to gang up and fine tune up to four resonant filters means that Volcano 3 can be an instrument in its own right, particularly considering the arpeggiation and sequencing features of the XLFO and available MIDI input options. This opens up the possibility of keyboard-controlled theremin patches, polyphonic sequenced melodies, sound effects and even your own DIY electronic kick drums. 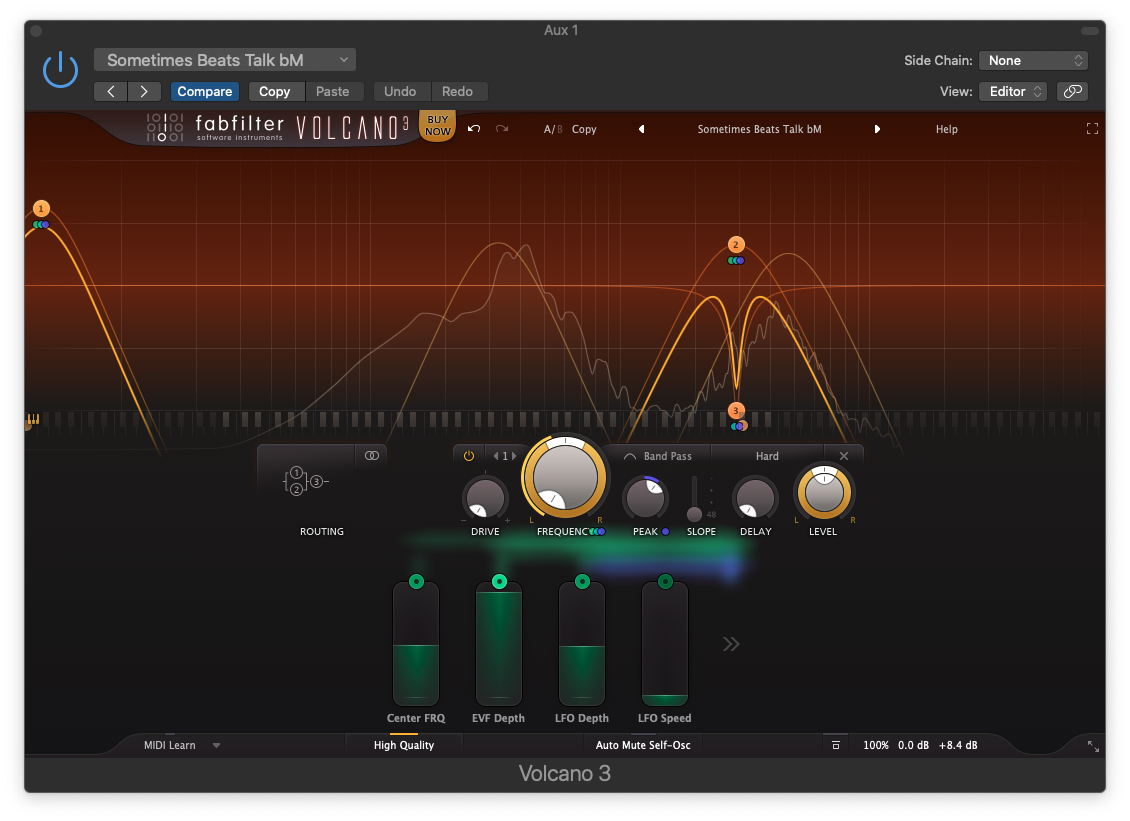 Speaking as a die-hard analogue devotee, I’m really impressed with both the sound and functionality of Volcano 3. Like all of the FabFilter products I’ve looked at, it’s smartly designed, deep, and yet easy to use. The modulation section, with its modular architecture, opens up virtually limitless possibilities for the creation of new dynamic and evolving effects.

The ability to label modulation sources is a thoughtful addition as well – so you can remember what you were thinking next time you recall a particularly complex patch, or just make life easier for other users if you choose to share your creations. I can’t even think of much I’d add or change, though the inclusion of a glide setting on the XLFO makes me wish there was one on the KB Track module as well. My theremin patch would sound even more realistic with portamento.

Volcano 3 is tons of fun and could help take your next mix (or remix) in some exciting new directions. Take it for a spin with a free 30-day trial and decide for yourself.